Jason used the National Numeracy Challenge back in 2018, as he wanted to improve his number confidence and be able to help his kids with homework. It also helped him move into a new job, but unfortunately Jason and his whole team were made redundant not long before Covid-19 hit.

We caught up with Jason for Number Confidence Week to see if his increased number confidence has continued to help him. 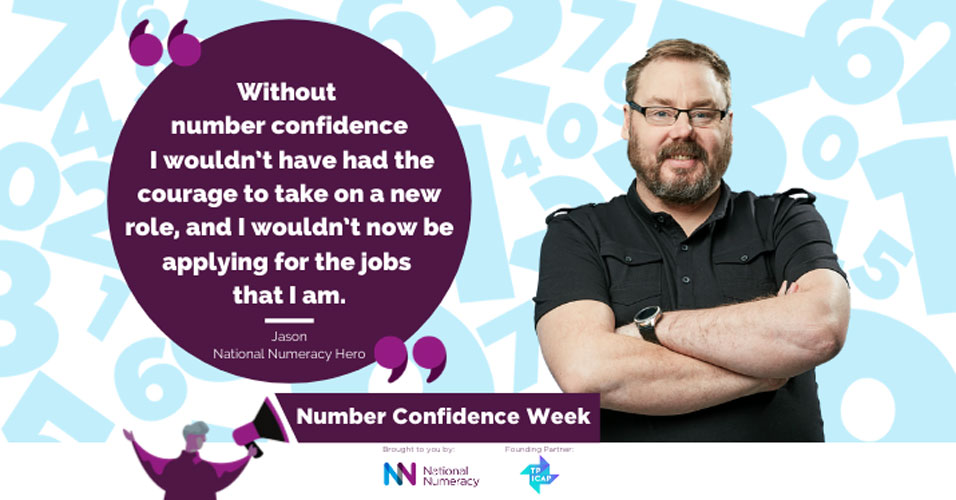 Since we got made redundant I’ve been doing agency work, but I’ve also been applying for jobs that I wouldn’t have dreamt of applying for before I worked on my number confidence! I’ve made it through to next stages of interviews for a few jobs, like admin at a golf course, and being a Customer Advisor.

What’s made you go for different jobs this time?

My experience from when my previous role changed to being a Returns Operative helped build my confidence, especially with numbers. I was dealing with sheets of figures and prices all day long and handling people’s money.

It’s a role that I had actually tried once before, before I had done the National Numeracy Challenge, and I didn’t stick with it. I had to do a lot with numbers, and at one point I made a mistake – I had to release some items and instead of 4 accidentally did 4,000! It really knocked my confidence, and I closed myself off from it thinking, “I can’t do this”. So, I asked to go back to my previous role, something that I was comfortable with. Maybe if I had persevered then I wouldn’t have made another mistake and learned from it, but it was just easier to step back to what I knew.

But you were asked to try that role as a clerk again?

Yes. It was after I’d done the National Numeracy Challenge, so thought I’d give it a go, as my confidence was better. I still had the mick taken out of me for those 4,000 items, but I persevered this time, and the team leader one day said to me, “It pains me to say this, but you’re the best clerk we’ve got”.

That must have been wonderful to hear!

I was buzzing! I came home and told my wife. I was so proud of myself that I’d overcome the fear with numbers, and that it was recognised that I wasn’t this bloke that makes 4,000 mistakes, or… 3,996 mistakes!

And actually, when we found out our work was closing down, I was asked to train the people who would be doing the same role in a different location!

So number confidence helped you realise you can do more than you thought?

Definitely. Without number confidence I wouldn’t have had the courage to take on the new role, and I wouldn’t now be applying for the kinds of jobs that I am.

Now I know that I can do more, I want to – and something that’s more of a challenge for me, using numbers.

I feel so much more confident in my job search, because I’ve got on my CV that I’ve done Level 2 Maths, which is GCSE-equivalent. I wouldn’t have gone in for the Level 2 if I hadn’t done the National Numeracy Challenge, and wouldn’t have even been considered for any of these roles.

And if I don’t get the jobs I’ve applied for, I’m still going to apply for roles like this because that’s what I want to do, and I know I can do them. I just want somebody to give me the opportunity to prove it.

Has number confidence affected everyday life at home too?

Definitely. My wife and I just bought a new car, and I was trying to work out what option was the most beneficial – comparing insurance, fuel economy, road tax – just because I like messing about with numbers now. And I think we got the best deal! So, it’s helping us save money.

You’ve got children; how have you found home-schooling this year?

It was tough, at first just getting them to do it was tricky! But we printed a lot of stuff off and I was helping them with it.

It was hard but it was fun, but also very frustrating as they’ve been taught in a different way to how I was at school. But it was definitely rewarding to see their faces when they realised they’d finished and got it right! It was really nice for us to have that time together as well, I think it bonded us more.

It’s wonderful to hear you’ve had some positive experiences this year.

Best of luck with everything Jason – we’re all rooting for you!