We first met Gillian whilst working together with St Aidan's Primary School on their mission to increase parental engagement. As Maths Lead she had to help children tackle a fear of numbers, but to do that Gillian first had to acknowledge and address her own maths anxiety.

Gillian spoke to us about her history with numbers, how it has influenced her teaching style and the advice she has for other teachers with similar fears. 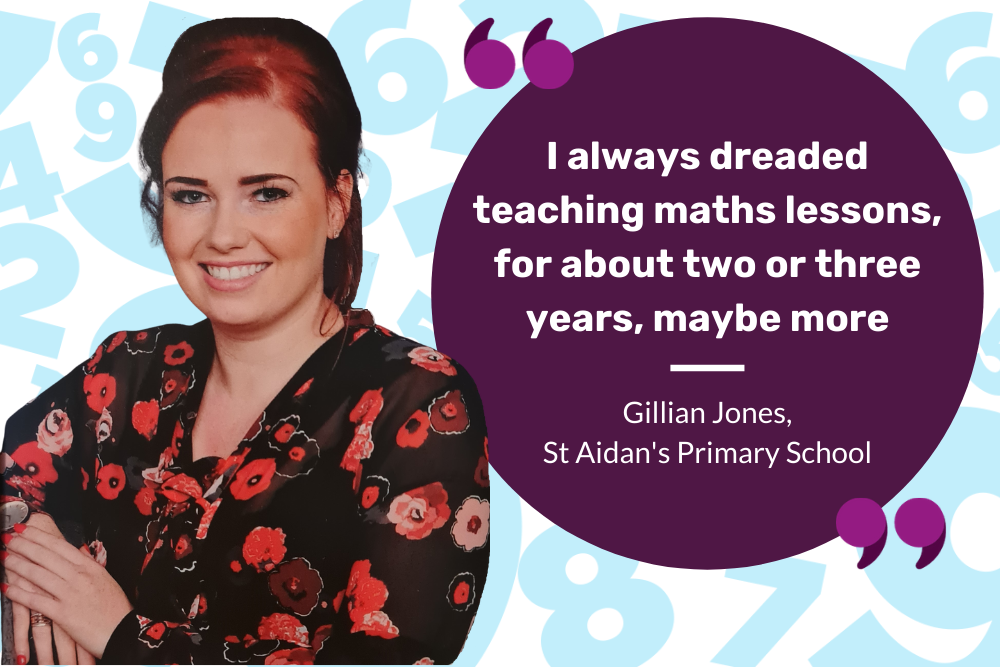 What’s your relationship with maths?

I always remember enjoying maths at primary school though I wasn’t ever in the top group, and in the first few years of secondary school I enjoyed it, but something went wrong after that. It’s really obvious when you’re set in different classes, and I was in the lower ability class. I don’t know whether that knocked my confidence, or it could’ve been becoming a teenager and losing interest, but I just felt lost in maths lessons.

That then grew into maths anxiety – which I didn’t know at the time, because I didn’t understand what that was, I just thought I hated it. In the last years of secondary school I knew I would need to pass the standard grade (Scottish equivalent to GCSE) to get into university to do primary teaching, but my grades showed that I was nowhere near achieving that. A family friend who had a PhD in maths offered to help, and the one-to-one help she gave me was absolutely vital. I think I was the only person in the class who got an A! That made me realise I can do maths, but that the classroom environment at the time didn’t work for me.

I managed to get what I needed for university and coasted through the primary maths course, but when I started teaching I remember panicking and having to teach myself every lesson the night before, and not feeling confident.

Then we started to use the Number Talks approach, and that helped with the gaps in my own knowledge and increased my confidence as well as the confidence of the learners in the class.

Our maths lead in the school then got promoted, and the head asked me to take on the role. I remember agreeing but then going home and crying, because I was terrified. I thought that if I’m going to lead this in the school, I can’t have this fear. That was the kick I needed to do a lot more CPD and research about maths anxiety, not just maths skills.

Since then there’s been a total shift. I now absolutely love teaching maths, learning new techniques and methodologies, finding resources and taking part in projects. It’s definitely been a journey though and took me a long time to overcome.

It sounds like finding out what maths anxiety is was a real help in itself?

Absolutely. It’s something I always talk to parents about now, because I would make the same comments that they make – I remember going into class, and if children rolled their eyes at maths I’d say: “I used to hate it too, but we just need to get it done.” Now to think that a teacher would say that is terrible!

I always talk to the parents about it because a lot of them are my age and feel as I did. It’s what we talked about at the parental engagement workshop – language and phrases to avoid. Knowing about it makes you stop and think what it is you’re actually worried about. It’s not that you hate maths but that you’ve got a fear of it, and we’ll get through this together.

What tips or advice would you give to people who think they can’t be teachers because of maths anxiety?

Just give it a try and don’t give yourself such a hard time. As a profession, teachers give themselves such a hard time – there’s such pressure on them. We’ve got student teachers in their first placements at the moment, who aren’t getting to do face-to-face teaching in classes but instead are all doing all their learning online. They’re not expected to come out and be perfect, and the perfectionism is an issue.

Don’t be so hard on yourself, learn from mistakes, and celebrate mistakes.

I think being open and honest about it as well is good, that’s one of the things I’ve started to do in my teaching. I’m open with the kids, saying “I can’t really figure that out, let’s work it out together.” I think people think – and I certainly used to think – that teachers have to know the answer all the time, but part of the process is working through it together and making mistakes. Having the confidence to make mistakes is what makes it easier for me.

I still don’t say I’m the best at maths, but I know what I need to do to get better, and I have.

Many adults and children feel worried or stressed when faced with maths. Find out more about how and why maths anxiety affects us, and how we can address it.

New for 2021, we are offering 28 free activities for primary school age children to help parents, carers and teachers support children with maths at home.