"If you could bottle the feeling it gives you, people would buy it” – Stacey’s story

Stacey is Workforce Transformation Manager at Sussex Partnership NHS Foundation Trust, and has had a tranformational journey with numeracy. She spoke to National Numeracy's Ben about how she's confronting her maths anxiety.

I had a really bad relationship with maths

Even the thought of it would dry my mouth and make my palms sweaty. I remember the first day of school with everyone reciting their times tables and thinking, “I don’t know what’s going on”, feeling totally lost and frozen on the spot. On a test I got 1/100, which I hate even talking about. At secondary school it carried on, I just didn’t get algebra. 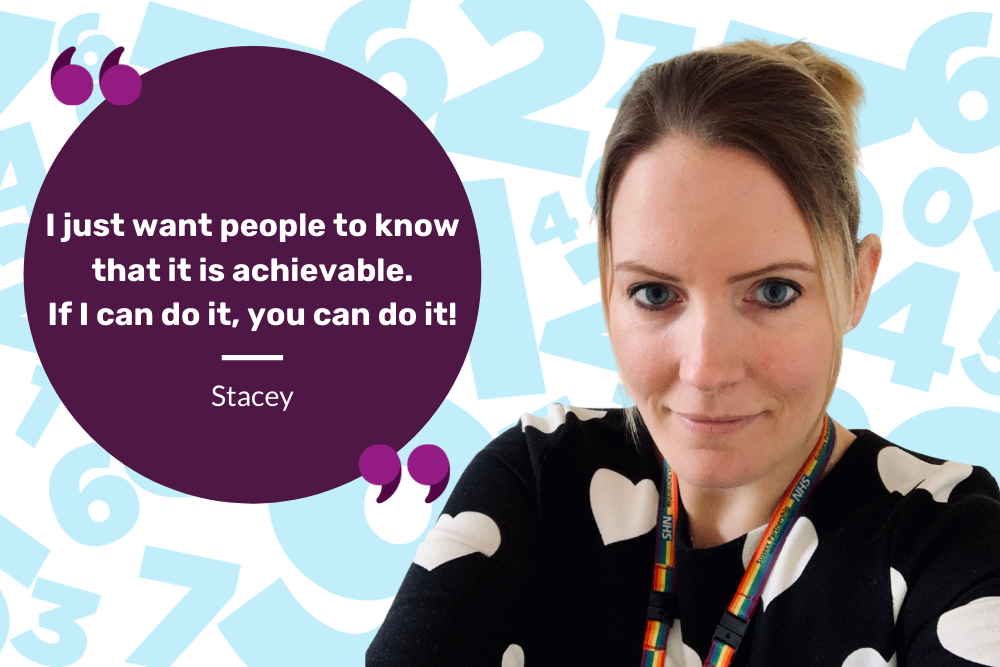 Fifteen years later when I joined the NHS I realised that while I’ve been muddling through, my struggles with maths were always in the back of my mind. Doing reports using numbers would make me anxious. I had this real fear of asking the same questions over and over. I was worried about what my manager must be thinking.

Now I’m an apprenticeship lead and encourage people to do Functional Skills, but I felt like a fraud and thought “if I don’t do this, how on earth can I expect other people to.”

How the National Numeracy Challenge helped me to overcome maths anxiety

I heard about the National Numeracy Challenge through our Functional Skills lead at work. When I heard about other people’s attitudes to maths, I thought “that’s me!” and decided I really needed to just give it a go.

Initially my score was low, but I expected that. It felt a bit like if you used to be a certain weight, then stand on the scales and think “I didn’t realise I was that bad.” That’s how I felt with the Challenge. I knew it would be bad, but I was in denial.

I went back to the Challenge when I was undertaking Functional Skills and my score started improving.

It was amazing to pass my Functional Skills

The Challenge really helped me with my Functional Skills studies. I found it useful to look at the resources and see where you went wrong, then have another go at it.  It doesn’t matter how long it takes you to get to an answer at the end. In the past I’ve been invigilated and that made me feel really vulnerable. It’s great with the Challenge because nobody can see your score.

When I got to my top score it felt amazing! I’d like to take it back to my teachers and say, “I’ve done it!”

My advice for someone who fears Functional Skills but wants to progress?

I just want people to know that it is achievable. I was talking to a deputy director who was scared to do a Chartered Manager Degree Apprenticeship because of the maths. I said, “If I can do it, you can do it!” and now she is! I would love staff of all bandings to come forward and give it a go, especially senior staff. It would give everyone more confidence to think that if they find maths hard that’s okay, but they can do it!

You might not think maths impacts your life, but it does. Simple things like measurements when you’re cooking, you’re able to do those conversions. Being able to think about this in my head makes me feel proud and empowered. If you could bottle the feeling it gives you, people would buy it. I wouldn’t be where I am today without National Numeracy.

Find out more about maths anxiety

What is a fear of maths, how does it affect people and their lives, and what can you do to help? National Numeracy has collected a variety of research, stories from real people, and advice about maths anxiety.