Working in a treasury with maths anxiety: Maria's story

Maria, from Oxfordshire, works with numbers every day but had always found maths extremely painful. She thought it was a feeling she'd never be able to overcome, and instead helped those around her to progress.

She spoke to us about facing her fears, and the reward of self-confidence. 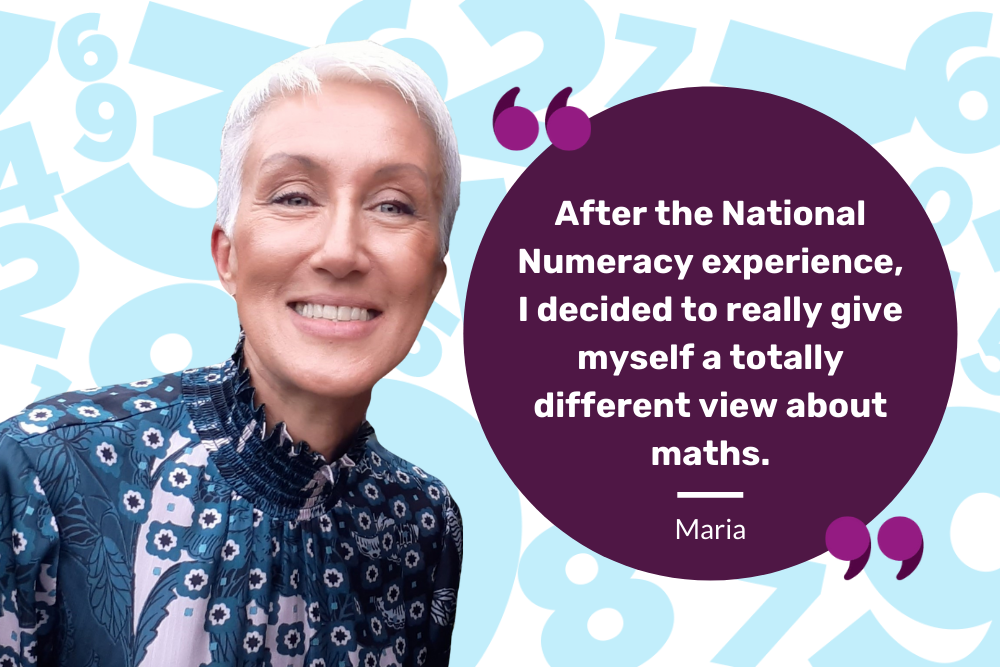 I associate maths with great pain, and I don’t think that’s unique. I never realised until later in life how not getting on well in maths classes as an infant, and the bullying I went through, had affected me. There was always an association that said “mathematics = bad situation”. In my school it was really quite bad. It was more or less, “all the dumbos go sit on the mat”, and everyone would laugh at us, and you’d be made to feel like a class reject with everyone else looking down on you. Children are really sensitive, and it was a sense of humiliation that carried into the playground because all those kids thought they were better than us. When I got home I would cry. So, my journey with maths began badly, and I’d always get a mental block, even when I moved out of that class. There was another teacher who was lovely, but I just used to seize up. There was nothing I could do to convince myself that I could do this. I just believed I was stupid. I never dreamt of going to university, and I ran out of school as early as I could because it was such a bad experience.

It stayed with me through my adult life. I’d go to a restaurant and everyone would say “let’s split the bill”, and I wouldn’t even want to get my phone out for the calculator because I’d be shaking. In my career, I’ve always held myself back. I work with numbers a lot, but I’ve got Excel here so I’m fine and not put on the spot – it’s not like mental arithmetic where I’m not allowed a calculator. People say, “Oh Maria works with figures, she’s great with numbers, go to her with any problems,” and I’m like, “No, don’t do that!” With basic arithmetic, I just have no confidence. I work for Britain’s third-biggest company in their treasury, so I handle billions of pounds and dollars. I’ve worked to the point of torturing myself, with how much I check things to make sure they’re right. I’m obsessive, and that was born out of fear.

I’d sit until midnight if I had to, and really put myself through the mill.

I only feel in the past year that I’ve grown out of that fear now, and I don’t make myself work 16-hour days, checking everything I do, because I found your website.

In my role I’ve trained new people and then they do lots of exams and move on, and I’ve seen that my whole career. I’ve always ended up training the new starters and they become manager’s managers, and I’ve accepted that that’s my journey. But one day someone else wasn’t particularly good with numbers, so that’s what made me search for something. I then thought about maybe doing some sort of maths qualification myself and getting my own confidence up. Your website was there and had all these stories of people that I could relate to. Had I not found it I would have probably tried to do an exam and backed out at the last minute, whereas this I could do at my own pace, in private, and really try. At the beginning I was so ashamed of my results, but the messages that come up are really encouraging, so you persevere. I did notice that I got better quite quickly! I realised that I’m not that damaged piece of trash that I had been told I was, and then told myself I was all my life. I just needed to carve a new memory into my mind that said, “When I do a maths exercise, a good thing happens.”

The National Numeracy Challenge is a positive message; it’s not demanding of anyone, and it’s not judging anyone. It was the fear of judgement that was getting to me before. And when you’re acting out of fear and doing things to compensate for this worry that everyone thinks you’re stupid, you do really obsessive things. National Numeracy’s positive messaging makes you think, “Somebody cares. Somebody’s cared enough to produce this.” So, thank you!

I definitely find using numbers in daily life easier now. I volunteer on a bookstall, and when I first got there, I kept asking the guy I was with for help. He was great but he was too busy to help me all the time. So, I grabbed a calculator and I would cancel it about five times, shaking too much about it. And in the end I said to the person buying books, “I'm really sorry,” and I went and hid, and I wrote it down and I got through it. And then the next one that came, I took the books and pretended that I was going somewhere with them. I said, “I'll be right back,” and I had to write out sums, which I had always felt rubbish at. But I did them and I came back, and I had to count out loud to work out the change as well. What I found was that some people would help me! They could see I was struggling, and they didn't judge me for not being able to add it up. Either people would help me, or I would go away and work it out. So, it wasn't a disaster, and I thought, “Do you know what? This isn't so bad. It's not such a huge failing as a human being that I'd always thought it was.”

It took a lot for me to face that anxiety, and I wasn't in a particularly good place at the time.

This was such a big part of my life because I work with numbers, and I think I did always see myself as less as everybody else. I had to work through it really hard and say to myself, “Actually, I'm alright.” For me to accept myself is enough. I don't need other people to accept me. Because it was ingrained from when I was a child, it went very, very deep with me. So, I would say, if it is a child, try to help with any maths fear as soon as you can. I don’t think people realise how vulnerable and impressionable children are to the attitudes around them. I wonder where I would’ve been now if I’d had a different start, and I think a lot of kids could say that. The lucky ones can say, “where would I be if I didn’t have those people in my life?” Everyone has a different story, because it’s the people around you.

For me, National Numeracy and your website was about a more understanding, more compassionate, less judgmental world.

It makes me emotional, but nobody would think that having an Achilles heel with mathematics could hold somebody back quite so much.

I thought about doing a maths qualification now, but I realised that I don't need to prove anything. With those exercises, I saw myself get better, and that was enough.

My advice for others

Maths comes into every aspect of life. If you want to order tiles for your bathroom, you have to work out the area if you want to order flooring. Even if you don't want to get involved, just knowing the basics makes people feel more rounded. And then you don’t end up with a box of unnecessary bathroom tiles under your stairs!

It just makes the world an easier place to be.

You don't necessarily need others to know it, but if you know for yourself that you're a competent person, then you feel more rounded in general. After the National Numeracy experience, I decided to really give myself a totally different view and a totally different memory about maths.