Evidence shows us that a positive attitude to maths is key to being numerate - having the confidence and competence to use numbers and think mathematically in everyday life. As part of our work, we examine what can be done to help everyone in the UK to believe they can do maths.

Here we analyse the key texts with particular emphasis on the work of Sue Johnston Wilder and Clare Lee on Mathematical Resilience, and Fixed and Growth Mindsets by Carol Dweck.

Negative attitudes are at the root of our numeracy crisis, rather than a lack of innate talent. In order for people individually and the country as a whole to improve, and in turn benefit from raised levels of numeracy, our attitudes have to change. 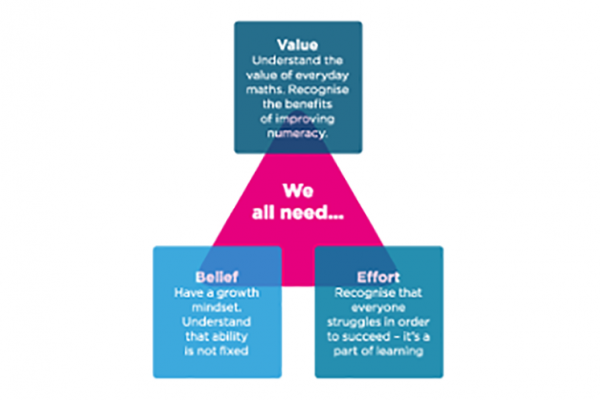 It is culturally acceptable in the UK to be negative about maths, in a way that we don’t talk about other life skills. We hear ‘I can’t do maths’ so often it doesn’t seem a strange thing to say (Kowsun, 2008). Maths is seen as the remit of ‘mad scientists’, ‘nerdy’ boys, and the socially inept (Epstein et al, 2010). Too many children are told they need a maths brain - we talk about maths as though it is a genetic gift possessed only by a rare few, and inaccessible to the general public.

Yet we all need maths, not just for school, but for everyday life and work. "Good numeracy is the best protection against unemployment, low wages and poor health" (Andreas Schleicher, OECD, 2013).

This paper looks at the causes of negativity, the impact this has, and what can be done to improve attitudes towards maths and numeracy.

What do you think is key to changing attitudes to maths in the UK?

Johnston-Wilder, S., 2013. Measuring Mathematical Resilience: An application of the construct of resilience to the study of mathematics.