Low levels of numeracy could be costing the UK economy £20 billion per year.

Economists from the Audit Office, commissioned by National Numeracy and led by Pro Bono Economics (PBE), reveal the damaging impact that poor numeracy is having on the UK economy. They estimate the cost of outcomes associated with low levels of adult numeracy at around £20.2 billion per year, or about 1.3 per cent of the UK’s GDP. 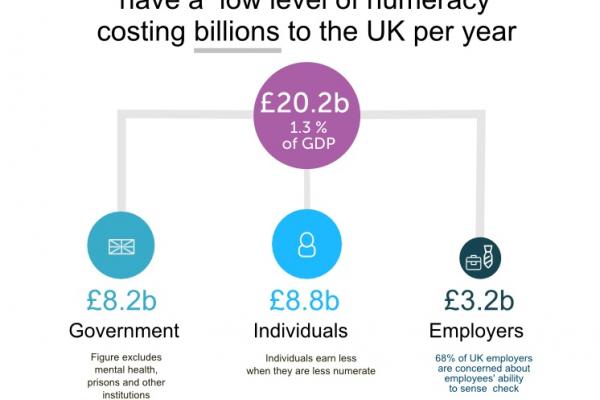 The estimate comprises costs to individuals, employers and the government (see image below), but does not take into account costs to the health service or criminal justice system and may therefore underestimate the real cost of poor numeracy.

Cost of Outcomes Associated with Low Levels of Adult Numeracy in the UK. 2014. Pro Bono Economics.

The research focuses on high costs to the economy deriving from the UK adult population’s low numeracy. ‘Low levels of numeracy’ are defined as entry levels 1, 2 and 3, which are roughly equivalent to the levels expected of children at various stages of primary school. In England and Wales, almost half the adult population are at these levels.

The method of estimating costs diverges from KPMG’s method in the 2009 report “The Long-term costs of numeracy difficulties”. KMPG used data from the British Cohort Study to estimate the lifetime costs to the public purse of around 36,000 Year 7 primary school children with numeracy difficulties. That estimate did not include the cost of lower earnings.

The estimates are made using research evidence which shows the wage penalty for being below the standard roughly equivalent to a low-level (grade D-G) pass at GCSE in maths is about 9%, with some variation across different age-ranges. The report suggests further research is needed into the possible increase in the labour market penalty attached to low numeracy over time. Using this wage penalty PBE arrive at the central estimate of a total of £20.2 billion cost to the economy per year.

There are also factors that increase the cost of low numeracy but which cannot be quantified at this point of time. These include health service costs, criminal justice costs, educational outcomes for the children of adults with low numeracy and poor finance management. Also, the PBE estimate does of course reflect only the ‘hard’ costs and does not take account of ‘soft’ factors such as the wider quality of life.

The findings are based on two assumptions: that the positive impact from better numeracy will scale up to the whole population, and that better financial outcomes associated with higher numeracy are fully caused by numeracy differentials. On the latter point, PBE believe that the supposition is reasonably strong as the data are based on econometric studies which adjust for the effects of social background and demographic characteristics. The former point is more debateable and would require further research in the long term. The cost estimates give ranges of the likely impact of low levels of numeracy on the UK economy and these ranges result from varying the assumptions behind the calculations £20.2 billion is the central estimate, based on a number of assumptions, within a range of figures between £6.7 billion and £32.6 billion.