Nearly 17 million adults have numeracy skills roughly equivalent to those expected of children at primary school (Entry Level 3 or below). The gap between numeracy and literacy was already broad in 2003 but it had expanded further by 2011.

This research from the Department for Business, Innovation and Skills reveals the extent of the numeracy issue in England (with other research showing the picture is broadly similar for the rest of the UK) and assesses the impact that different levels of skills have on people’s lives. It also looks at links with other factors, such as age, attitudes and employment status and earnings. 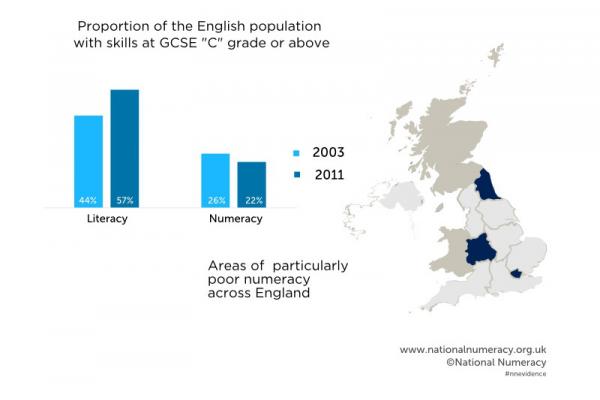 2011 skills for life survey: a survey of literacy, numeracy and ICT levels in England. 2012. Department for Business Innovation and Skills.

The Skills for Life survey follows on from an earlier survey in 2003 and sought to measure the impact of the government's Basic Skills Strategy. It was based on a sample of 7,000 adults aged between 16 and 65 and assessed numeracy, literacy and IT skills.

The headlines of the Skills for Life survey were largely ignored when they were first released in 2011 but National Numeracy draw attention to them on its launch in March 2012. The full report was published later that year and proved seminal, informing our approach to improving numeracy and changing attitudes.

One of the matters of greatest concern in the survey was the dip since 2003 in the numeracy performance of the youngest age group, the 16-24s. In 2011, only 24% of this group demonstrated numeracy skills at the level deemed equivalent to a GCSE A*-C pass in maths – despite 64% of all pupils passing Mathematics GCSE at A*-C (Department for Education, 2015).

As well as analysis by age, there is detailed data on the links between performance in numeracy and region, gender, employment status and earnings, ethnicity, educational and socio-economic background and attitudes. For example the survey shows that people who regarded their maths as weak were less likely to check bills or bank statements and felt that their job opportunities were hit. It also found that the groups most likely to take a numeracy course were those in search of employment and the under-25s, but the survey was not able to show how training actually affected performance. The effects on skills performance of the increase in the number of people without English as a first language is also considered.