EE drops ‘too pretty to do maths’ phone cover

Communications company EE has removed a phone cover which bragged ‘I’m too pretty to do maths’ from its online shop after a backlash from teachers and others. 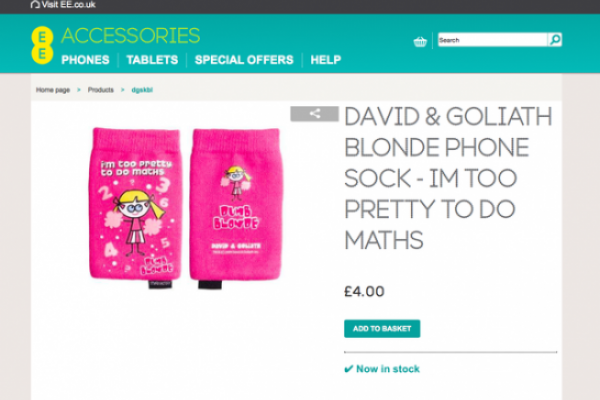 The pink phone cover, clearly aimed at girls, was being advertised on the EE UK website for £4.  Dr Hannah Fry, a lecturer in the Mathematics of Cities at UCL and regular TV and radio personality, tweeted EE to say ‘Hey @EE, the 1950s called and they want their regressive attitudes back’.

There followed a surge of similar responses on Twitter, with GLOW maths saying ‘No, just no! Schools are working hard to promote a #YesUCan attitude to maths’ and Education Secretary Nick Morgan adding ‘Thanks for bringing to my attention - appalling, tasteless & damaging’. Mike Thain, Head of Mathematics at a school in Hampshire, wrote an open letter to the CEO of EE about the damaging message, calling for a commitment to do more to promote the importance of maths.

A similar backlash has occurred in the US about the product, which is manufactured by clothing company David and Goliath.   EE has responded to social media complaints by posting a letter on Facebook.

National Numeracy had raised the issue directly with EE and welcomes the decision by the company to remove the product and will now seek an opportunity to talk to the UK management about the problems caused by negative attitudes towards maths.