From fear and nerves to becoming a Numeracy Champion: Kelly’s story

Kelly is a Senior Learning and Development Advisor at Frimley Health NHS Foundation Trust. Recently she’s become a Numeracy Champion through National Numeracy’s training programme, but she wasn’t always the most confident when it came to numbers.

We spoke to her about overcoming demotivation and disengagement, the benefits of facing learning as an adult on an apprenticeship, and why she now loves supporting others on their own journeys to number confidence. 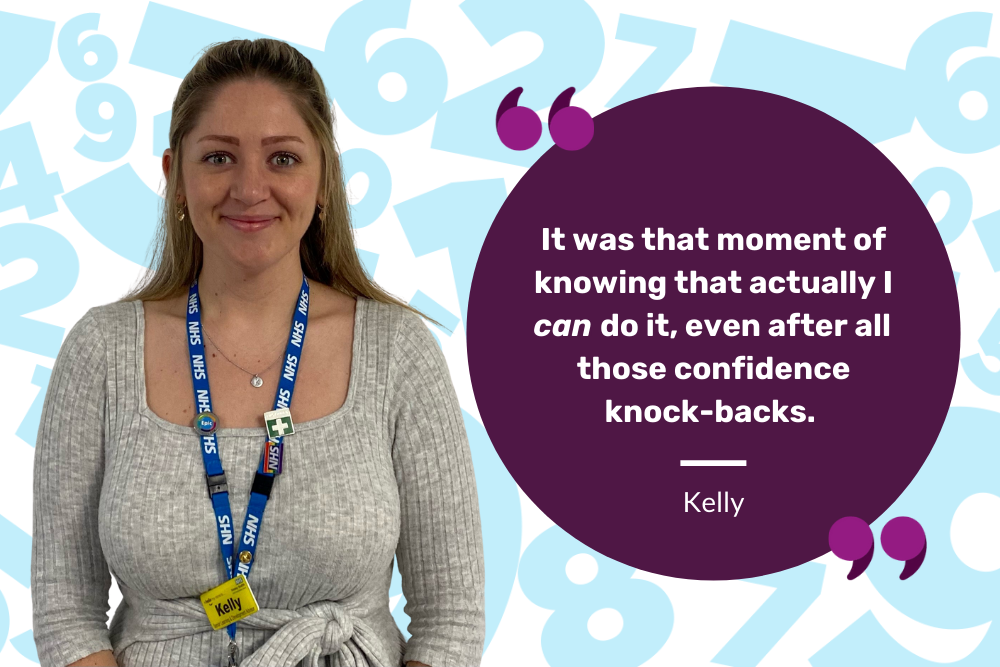 How has your relationship with numbers been in the past?

Maths was never an area that I enjoyed. I really have to enjoy something to engage with it, and I particularly struggled once I got to secondary school. I liked other subjects like drama and English more, so found myself putting more effort into those and becoming quite disengaged with maths. I also struggled to understand the logic around maths, and at school there’s one teacher, there’s a classroom of 35 students, and you just have to get on with it.

At parent-teacher evenings, whether I had some form of ‘dyslexia with numbers’ was discussed. When I was looking at things like practise exams, even when I did my Functional Skills recently, I’d look at a question and know that somewhere in it was the question, but there was so much else around it. I’ve always struggled with almost having too much information, meaning that I can’t quite understand what it is that’s being asked of me. It scares me and puts me off straightaway.

So I got the dreaded D grade at GCSE, just outside of the C grade I needed. I was really upset – I knew maths was never a subject I connected with, but it still upset me because I knew to progress to the A-Levels I wanted to do I’d need that magical C grade. So I tried again not long after, and again got a D. I went to college but was told I’d have to do an additional year because I needed that maths grade. So the first year was trying to get my maths, and I still didn’t; I got a D again. I was so demotivated and thought I was never going to get the C grade I needed, so I didn’t complete my A-Levels. I thought I wasn’t ever going to go into a field where it required maths heavily. It was only when I joined the NHS and looked at an apprenticeship that I was told I’d need a C grade or equivalent in maths.

What helped you to fight through those negative feelings?

Sixteen years on from when I was last taught maths, I decided to try again. It really frightened me, but I discovered it was different with Functional Skills, because it was more relatable to my everyday life. At school you’re set the curriculum, and can’t deviate; you have to learn algebra, Pythagoras’s theorem, formulas, because you never know what’s going to come up on the test. That’s where Functional Skills is different – although there are still things like ratios in there, percentages, and fractions (which always will be my nemesis), they appear in ways that made me realise I actually do use them a lot in my job.

Even though I was nervous because I’ve been out of education, I’ve also grown up and decided: “This is something you need to do in order to gain your qualification in your profession, get your head down, practise, revise!” I started finding myself in a supermarket saying: “Ooh that’s got 35% off,” and trying to work it out, when usually I’d pull out my phone calculator or ask my partner. But I found myself trying to work it out myself and put what I had learnt into practice.

What also made the difference was finding the value in why I was doing it, because I lost sight of that as a student. That’s why I’m really on board with National Numeracy’s ethos of Value, Belief & Persistence. The end goal for me was improving my numeracy so I could complete my apprenticeship. That gave me the push I needed.

It was still challenging – I don’t want to fluff it up and say it was easy, because it wasn’t, and I did put in a lot of effort. I found the “little and often” approach quite good for me, I’d do half an hour here and there and test myself, and get my friends and family to help. It still challenged me, and I’m sure in my final exam there were questions I got wrong. I remember in the non-calculator paper that I got so flustered with the first question and couldn’t make sense of it, so I moved on and came back to it. When I did, I realised I’d missed a word when reading the question the first time, and suddenly it made sense – but initially the fear and nerves had got to me.

How did it feel when you passed?

I thought my tutor was joking! Of course she wouldn’t have been, that would have been an awful thing to do! Although I’d come out of the exam feeling okay, I always had that little voice in my mind saying: “You tried three times before and didn’t pass then – what’s changed?” So, when she told me, I had to sit back and let it sink in, and then I let out a little scream and said: “I’ve passed my maths!”

It was that moment of knowing that actually I can do it, even after all those confidence knock-backs.

It proves you can do it at any age. I definitely think the element of maturity helped me, not hindered me, like I thought it would have done at the start.

Why did you decide to train to become a Numeracy Champion with National Numeracy?

I have lived through the fear that so many people have about maths so I’m able to do more than just say: “I appreciate that you feel like that.” For me, it’s so impactful when you’ve been through the process yourself. I’m always very honest to say I don’t think I’ll ever be someone who absolutely loves maths, but I can say I’m someone who struggled with maths and motivation and confidence, and I’ve come through the other side. I probably did give up after that third low grade, and I probably could have given up this time, but I wouldn’t have gone onto the apprenticeship and Learning & Development qualification. So, every time I deliver the National Numeracy session as part of the Care Certificate, I always take time to tell my story, because I can say I’ve been where they are right now. I want to support people, and be their cheerleader on the side-line, because I know I’ve been lucky having supportive people both inside and outside work, so I want to make sure they have an advocate too.

How did you find the Becoming a Numeracy Champion training?

It was good! I like being interactive on any training sessions, which is partly why I got into Learning & Development. I enjoy mixing and networking with other people, and a key part of it for me was coming together with other individuals and sharing experiences, but also what they’re doing and how we can learn from one another. Everything that was provided to us by National Numeracy was just really relatable and really simply laid out, so I felt really comfortable at the end and came away feeling confident to deliver the training on the Care Certificate.

Has it helped you in your role?

Yes, it’s really useful understanding that maths is a fear and barrier for a lot of people, and that National Numeracy was created for that particular reason. I love saying to the people I work with: “Let’s get you on the right start with the National Numeracy Challenge to see what level you’re at, and that will help us tailor your learning and help you on your apprenticeship.” Having the knowledge of what National Numeracy is doing and being part of that now, with the network Champion group, definitely plays into my role in having to promote and lead on it in the NHS trust.

We get some really nice feedback on the attitudinal session, and I pair it with a career progression session, and afterwards I get a lot of emails from people saying: “Actually, I am keen to do an apprenticeship, but do need to get my Functional Skills.” The interest gets sparked.

What would you say to other people in Learning & Development who are thinking of becoming a Numeracy Champion?

It’s a great opportunity to really align with what you’re doing. You’re probably in Learning & Development because you enjoy watching people grow in their confidence, and I think by being able to provide some content along with delivering the attitudinal sessions, you can really feel a part of a person’s journey. I really do every time I deliver them, and I can see people’s faces as I talk about maths and can really put myself in their shoes.

Being able to be part of someone’s journey, there’s nothing better for me, so that would be my advice; just do it!

National Numeracy does a fantastic job and are really supportive of us as a partner, providing us with information and communicating with us. I really enjoy the partnership. You’ve really supported me through it as well, so thank you!

If you'd like to become a Numeracy Champion, take a look at our unique suite of training courses and workshops for organisations, workplaces and schools.

Many adults and children feel worried or stressed when faced with maths. Find out more about how and why maths anxiety affects us, and how we can address it.