It's National Numeracy Day & we're celebrating the importance of numbers 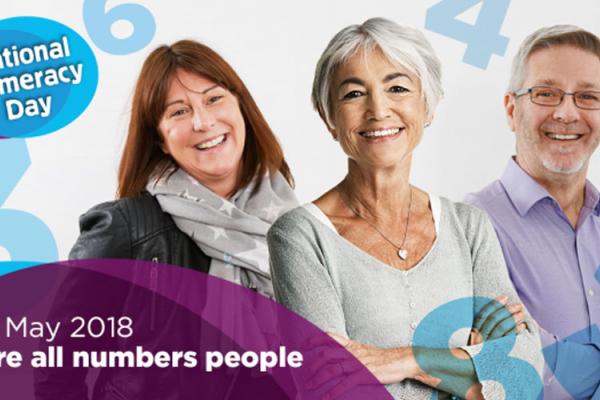 New research released today to mark the launch of the UK’s first ever National Numeracy Day has shown that anxiety around numeracy and maths could be holding back millions of people from getting on at work or getting a better deal on their personal finances.  Along with the campaign’s founding supporter KPMG, we are hoping the event will raise awareness of the many benefits of good numeracy and help people to feel more confident in improving their skills.

The research carried out online by YouGov on behalf of National Numeracy, surveyed over 11,000 people and revealed that almost half (45%)  of UK adults have struggled with everyday tasks involving numeracy, whilst 37%  have found these tasks to be stressful due to the maths involved. The tasks they struggled with most included calculating exchange rates on foreign currency (17%),  working out how an annual percentage change affects the payment due on a loan or credit card repayment (16%)  and checking that they have been taxed the right amount on a payslip (13%).

Martin Lewis, Founder of MoneySavingExpert.com, is an official ambassador for National Numeracy and comments: “Good functional maths is the sword in our consumer protection armour. Yet sadly, even with a calculator, most people couldn’t work out the monthly repayments on a £5,000 personal loan at 10% interest over five years. There’s a core reason why Brits were ripped off by nearly £30billion with PPI mis-selling, whilst lenders relied on people not to notice repayments were £20ish a month higher than they should’ve been. This is why I support National Numeracy Day. Numbers impact our daily lives. I’d love people to let go of their fear, and try to improve their skills using National Numeracy’s online assessment tool so that their maths makes life easier”.

Despite admitting to struggling with everyday numeracy tasks, the majority of people don’t identify themselves as being poor at maths. In fact, many of us may be overestimating our numeracy skills, with 64%  of those surveyed rating their numeracy as good or excellent – in contrast to a recent Money Advice Service report which suggests that at least 18.5m working age adults have poor or low numeracy levels.

Mike Ellicock, Chief Executive of National Numeracy, says: “We know from experience that attitudes have a huge role to play in holding people back from improving their numeracy skills, with many people telling us they are just not ‘numbers people’ or that they don’t believe they need to improve. However, we believe that many of us are just getting by when we could be getting ahead: earning more, saving more and doing the things we love better. Simply by getting a better grip on our numbers.”

When it comes to attitudes to improving numeracy, just over a third (35%)  of people surveyed said they would like to improve – and for those that said they didn’t, it was because almost two thirds (65%)  didn’t think they needed to and 30%  didn’t see how it would benefit them. But the benefits of good numeracy are clear; not just for those looking to get a better deal on personal finances, but also for those hoping to get on at work.

The survey showed that almost one in five (19%)  of us admitted to making a mistake with numbers at work, while 7% have felt stressed due to the maths involved in our jobs. Just 4% of workers say they have been given training and support by their employer to improve their numeracy.

According to Melanie Richards, Deputy Chair of KPMG, having good maths skills will help you progress at work, even if your dream job isn’t in finance: “No matter which industry or job you work in, as you move up the career ladder, you will become involved in making financial decisions and eventually may be responsible for budgeting and financial planning. So even if your chosen career doesn’t involve numbers at first glance, good numeracy will still be really important to help you achieve your future goals.

“KPMG is backing National Numeracy Day because whilst the UK has made progress on improving literacy levels, numeracy levels have gone backwards. Right now, those without good numeracy get held back in all areas of life and we want that to change. The first step is to debunk the myth that if you are ‘bad with numbers’ you can’t improve because that’s not the case. I’d urge anyone who isn’t confident in their ability when it comes to numbers to go online and try the National Numeracy Challenge tool.”

National Numeracy Day is aiming to help thousands of people to take action to improve their number skills over the next year, starting by checking their current numeracy level using the free online assessment tool and if needed, using the free resources to help them gain greater skills and confidence with numbers.

We'd like to thank all of our official supporters of National Numeracy, in addition to the campaign founders, KPMG:

You can read more about all National Numeracy Day supporters, including 80+ Champion organisations, plus highlights from the day on the campaign website www.numeracyday.com

See how others are getting involved online #numberspeople