National Numeracy, along with founding supporter KPMG, is setting out to help thousands of people to take action to improve their skills today for National Numeracy Day.

A survey released today has revealed that millions of adults in the UK could be missing out on the benefits of improved numeracy skills due to a failure to appreciate their importance in everyday life, and finds that: 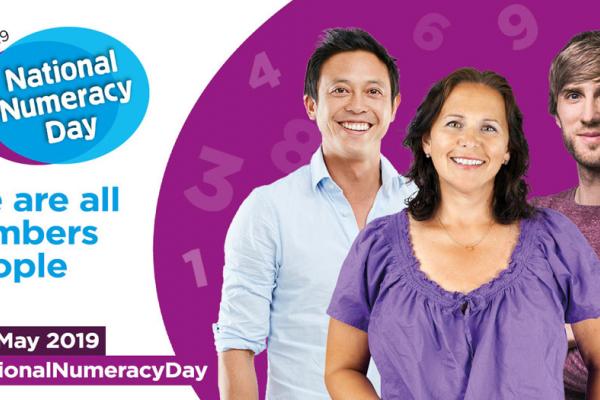 The research carried out by Ipsos Mori on behalf of National Numeracy and analysed by the Policy Institute at King’s College London, surveyed over 2,000 people and revealed that just one in five people who took a set of five numeracy test questions achieved the level of GCSE grade C. Just 6% got all five correct and 10% scored zero. Despite this, 43% of those surveyed said they would not like to improve their numeracy skills, with almost a quarter (23%) stating it was because they couldn’t see how it would benefit them.

Rachel Riley, mathematician and TV presenter, is an official ambassador for National Numeracy and comments: “Good numeracy isn’t about being a maths whiz or having the ability to do complex mental arithmetic, it’s about having the knowledge and confidence to apply numbers-based solutions to everyday tasks such as shopping, budgeting, planning a trip or even following a recipe. With numbers playing such a key role in all our lives it’s vital that people not only start to view it as an essential skill, but also one to be proud of. Whatever your current ability, numeracy is a skill you can improve on at any age and the free online National Numeracy Challenge is the perfect place to start.”

The survey highlighted that numeracy skills are not held in as high esteem as literacy skills amongst the public. While three in five (58%) people would feel embarrassed to say they were no good with reading or writing, far fewer (47%) would say the same for maths. Parents may also be influencing their children’s views on the value of numeracy, and limiting their ambitions, as more than twice as many people said they would be proud of their child if they were good at reading and writing (50%), compared to if they were good at maths (21%).

Misconceptions are also rife around the value of numeracy skills in the workplace, with almost a third (30%) believing that most people don’t need to use numbers as part of their day jobs. In fact, 28% of people think that hairdressers never or hardly ever use numbers at work, followed by journalists (26%) and politicians (20%). The professions that were thought to use maths and numeracy most often were architects (80%) and teachers (74%), suggesting that there is a lack of understanding and recognition of the use of everyday numeracy skills such as interpreting data, applying discounts or time management.

Mike Ellicock, Chief Executive of National Numeracy, says: “With so many people viewing maths and numeracy as either a talent gifted to the few, or something that isn’t essential to work or home life it’s not surprising that there is a reluctance to invest time and effort in improving numeracy levels. However, we know from experience that even a small investment can make a significant difference to people’s confidence and ability with numbers, and this in turn has a positive knock-on effect to many areas of life, from careers and financial management to mental health.”

While many people mistakenly believe their chosen profession doesn’t require maths or numeracy skills it’s clear that a lack of confidence with handling numbers is limiting career potential across all industries. One in four surveyed said they would be put off from applying for a job if it listed using numbers and data as a requirement. This lack of confidence is being negatively reinforced by others, with 15% of people saying they had been told by someone that they are ‘not a numbers person’ and 31% agreeing with this statement.

Melanie Richards, Deputy Chair of KPMG, believes debunking the myth of the ‘maths person’ is key to addressing the nations’ numeracy problems: “KPMG is proud that our support of the first National Numeracy Day in 2018 helped raise awareness of the importance of numeracy skills in everyday life, and encouraged 25,000 people to start their journey towards improved numeracy, so by working with National Numeracy and collaborating with hundreds of businesses and major this year we’re determined to go even further.

“If you’ve ever been told, or have told yourself, that you’re ‘just no good at maths’ then now may be the moment to challenge that view. Numeracy is a skill like any other that can be learnt at any time in our lives. What’s more, it’s a skill that has great value for everyone, no matter what industry or role you work in or aspire to and one that could be critical in unlocking your potential and helping you achieve your future goals.”

The five test numeracy questions that survey respondents were asked to take are based on those featured in the National Numeracy Challenge, an online assessment tool that allows people to check their current numeracy level and if needed, use the free resources to help them gain greater skills and confidence with numbers. This National Numeracy Day is aiming to inspire thousands more people to take the Challenge and discover the many ways that better numeracy can benefit them.

1 Poll of 2007 adults aged 16-75 by Ipsos Mori on behalf of National Numeracy. All interviews were conducted online between 5th and 9th April 2019. Data weighted to reflect the national population profile.

2 2011 skills for life survey: a survey of literacy, numeracy and ICT levels in England. 2012. Department for Business Innovation and Skills.