The impact report for the fifth National Numeracy Day, on 18 May 2022, reveals how the campaign achieved a genuinely transformative level of impact across the UK.

With our celebrity ambassadors, supporters and champions, we inspired almost half a million actions towards improving numeracy – more than five times as many as last year. 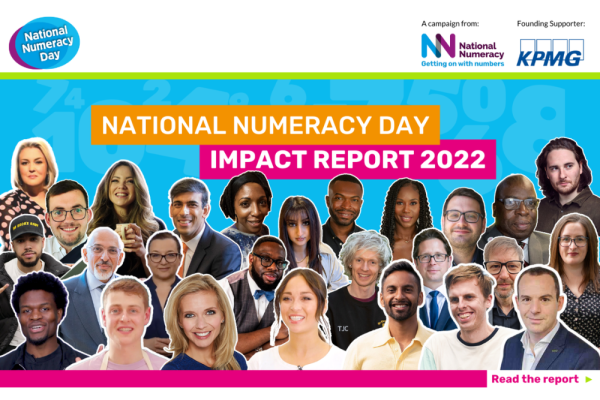 This year,  National Numeracy Day supported an unprecedented  number of people to think differently about  numeracy and take action to improve. The confidence and skills to understand  and use numbers makes a vital positive difference, particularly to UK households  struggling with the cost-of-living crisis. Impact in 2022 included:

459,742 actions to improve numeracy during National Numeracy Day 2022, including:

Over the five years our campaign has been running, a massive 650,000 actions have been taken to improve numeracy because of National Numeracy Day. Those steps towards a brighter future have never been so crucial.

Sam Sims, National Numeracy Chief Executive, said: "A success on this unprecedented scale could not have happened without the incredible support of our partners. To the campaign’s founding supporter KPMG, our lead supporters, lead delivery partners, champion  schools and organisations.

"This year, we’re particularly grateful for the commitment of our partners. Helping the nation get on with numbers has never been so vital a cause. The cost-of-living crisis means UK households are facing tough decisions, where being numerate is a material advantage. Good numeracy doesn’t make the challenges disappear, but it means people are better equipped to face them. "

Bina Mehta, Chair of KPMG, founding Supporter of National Numeracy Day, said: "It has been so heartening to see the National Numeracy Day campaign gather pace in its fifth year. A record-breaking number of individuals, businesses, policy makers, schools and other organisations came together to help bolster number confidence and skills."

See how the campaign inspired the UK to get on with numbers this year!