Involving parents in their children’s maths learning clearly improves classroom performance and confidence, according to a new report published today. 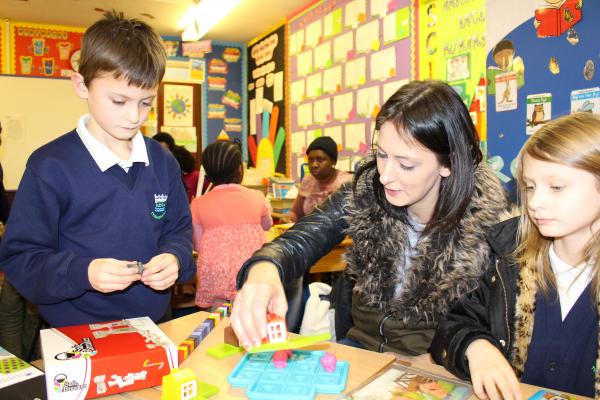 ‘The Parent Factor’, published by the Mayor’s Fund for London and National Numeracy, as part of the Fund’s ‘Count On Us’ maths programme for schools in more deprived parts of the capital, reports the findings of a project carried out among 6,500 children and 3,000 families in 28 London primary schools.

The project was developed after an earlier study by the Mayor’s Fund for London and National Numeracy found that parental engagement was the aspect of maths education most concerning to primary teachers. Several schools taking part described engagement of parents at their schools as ‘poor’ at the start of the project.

The schools were given expert advice on drawing up their own parental engagement action plan at the start of the 2015/16 school year, and during the following three terms they ran parents’ workshops, invited parents into class, introduced maths games clubs, produced maths guides and newsletters and offered parents one-to-one support and links to family learning maths courses.

In addition, schools were provided with National Numeracy’s Family Maths Scrapbooks and free resources from the charity’s online Family Maths Toolkit. The Scrapbooks – which feature maths found in everyday life – were taken home as alternatives to traditional homework.

By the end of the programme, 79% of teachers reported increased parental engagement leading to significant improvement in children’s concentration levels during maths lessons and better than expected assessment results among many of their pupils.

Among the findings reported in ‘The Parent Factor’:

Commenting on the results, Matthew Patten, chief executive of the Mayor’s Fund for London, said: “Parents represent the biggest problem and offer the greatest solution to raising maths attainment, particularly for children from disadvantaged backgrounds. Many of their parents struggle with numeracy or, if English is not their first language, can find it almost impossible to interpret homework. The results of this project demonstrate the massive improvements that can be achieved by supporting schools to help parents actively support their children in their learning.”

The project director, former headteacher and National Numeracy trustee, Di Hatchett, said: “Research tells us that children benefit immensely if their parents take an active interest in their learning. But maths is a subject where parents so often lack confidence themselves, so there can be extra hurdles. Children pick up signals from their parents and if you can increase parents’ own confidence and engagement, it has a powerful effect on their children. This is the vital parent factor.”

Abi Walton, deputy head at Laurel Lane Primary School in West Drayton, London, said: “I think the difference between maths and other subjects is that it’s something that parents have usually had problems with themselves. Often they don’t have any passion for the subject and don’t see the point in it. So it’s about showing the bigger picture and why maths skills are so important.

“We held a big maths challenge after school one night with a quiz for parents. Children were completing activities round the room which parents were really impressed by, saying: ‘Wow, when I was at school I didn’t do maths like this.’ What they saw in their children was so smart and intelligent and it really made the children shine because of the parents’ positivity.”

A parent who attended one of the maths games workshops said: “My kids …. dragged me here! I had my Year 1 work out Year 6 maths puzzles. At the end of the day, we were playing but also learning how to solve problems at the same time; the workshop helped parents and children to build confidence in one another.”

Professor Charles Desforges, emeritus professor of education at Exeter University and a leading authority on parental engagement, said: “This highly successful project is an object lesson in making an educational difference in challenging settings. It conforms to all the principles as revealed by research in the field, i.e., intervene early, work with parents as partners and focus on core skills. Prime Ministers please note.”

Antoine Forterre, trustee of the Man Charitable Trust, which funded and supported the project, said: “We are thrilled with the impressive results of the ‘Count On Us’ maths programme, and proud to support the Mayor’s Fund for London which conducted it. As this report demonstrates, through targeted engagement, it is possible to achieve significant and important improvements in numeracy and maths confidence. As a business founded on our ability to attract and nurture some of the best numerical talent from the UK and beyond, we are honoured to play a part in helping each child to achieve their potential.”

The parental engagement project, funded by the Man Charitable Trust, took place between September 2015 and June 2016 in 28 primary schools in 15 London boroughs. Surveys were completed at the start and end of the project by 140 teachers, 722 parents and 916 children in 19 schools.

Photo credit for all images above: Mayor's Fund for London