The Spring Numeracy Forum brought together a diverse range of speakers to discuss ways of improving numeracy at secondary school and in the workplace. 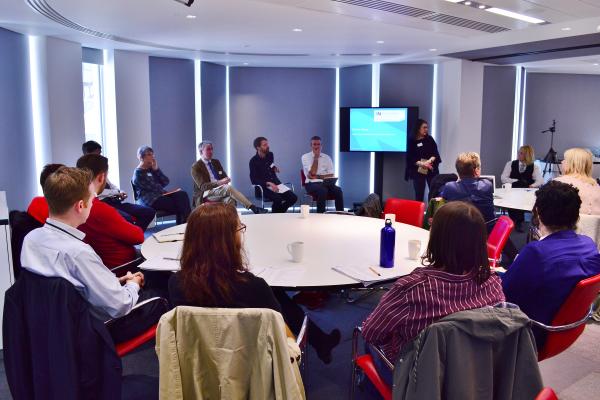 Leading figures from Cambridge Maths, the exam board OCR, Whitbread, Health Education England and the Chartered Institute of Personnel and Development among others gathered at Nationwide Building Society's London headquarters to talk about what numeracy skills secondary school students need and the links between numeracy and workplace productivity. Both sessions sparked some lively debate in the room.

In the morning session on what numeracy skills young people need at age 14, Lynne McClure from Cambridge Maths talked about the need for curriculum coherence, for young people to have a sense of the ‘mathematical landscape’. Paul Milner from National Numeracy described his work with Cambridge Maths on the ‘essentials of numeracy at 14’.  Will Hornby of examination board OCR looked at the exam structure and highlighted its built-in failure – the fact that the bottom 40% of pupils taking GCSE maths will inevitably fail – as the exam is the cohort referenced.  Lynne McClure described it as a “blot on our education system that we set people up to fail.”

Charlie Stripp of the National Centre for Excellence in the Teaching of Mathematics responded to the other speakers, making the point that the new GCSE would probably work better for high attaining than for low attaining students; but it was there and everyone had to do their best to make the system work.

The afternoon session explored numeracy in the workplace. Catherine Paulson-Ellis of Sheaf Valley Education and formerly of BIS/DfE began by showing how a buoyant labour market disguises the growing problem of low numeracy. She noted that the effects of poor numeracy show themselves as a general lack of confidence and avoidance of certain tasks, masking the basic skill gap.

Tim Douglas of Whitbread talked about how poor numeracy impacts the twin business challenges of staff recruitment and retention at Premier Inn, one of the company’s brands. Maths is part of Whitbread’s development and training and they have been working with National Numeracy to  incorporate the Numeracy Challenge into WISE - Whitbread investing in Skills and Education. He noted that, of the skills certificates people keep and frame, maths is the one they value most.

Dawn Grant, a manager from Health Education England, spoke about why maths matters for health care support workers. Potentially good carers were being lost, she said, because they didn’t have good enough maths and numeracy skills to pass the initial assessment.  She set about introducing the Higher Development Award for health care workers which included the NN Challenge to improve their numeracy levels. The results were outstanding in terms of improved confidence and in-work progression. She played a short film of Higher Development Award candidates speaking about their fear of maths and the sense of achievement at having progressed through the Challenge.

Lizzie Crowley from the Chartered Institute of Personnel and Development gave an overview of numeracy and its role in the UK’s overall productivity. Her presentation showed how, despite being a high investment economy, the UK achieves only mediocre results in international comparisons.

Each session was followed by full debates by Forum participants.