Tamsin works at Butterfly Nursery with Cara Mitchell, who we spoke to back in 2019 about the nursery’s mission to get their staff on the “numeracy train” with the National Numeracy Challenge.

We caught up with Tamsin to see how building her confidence with numbers has helped her work in a nursery, as a Lead Apprentice, and in her everyday life. 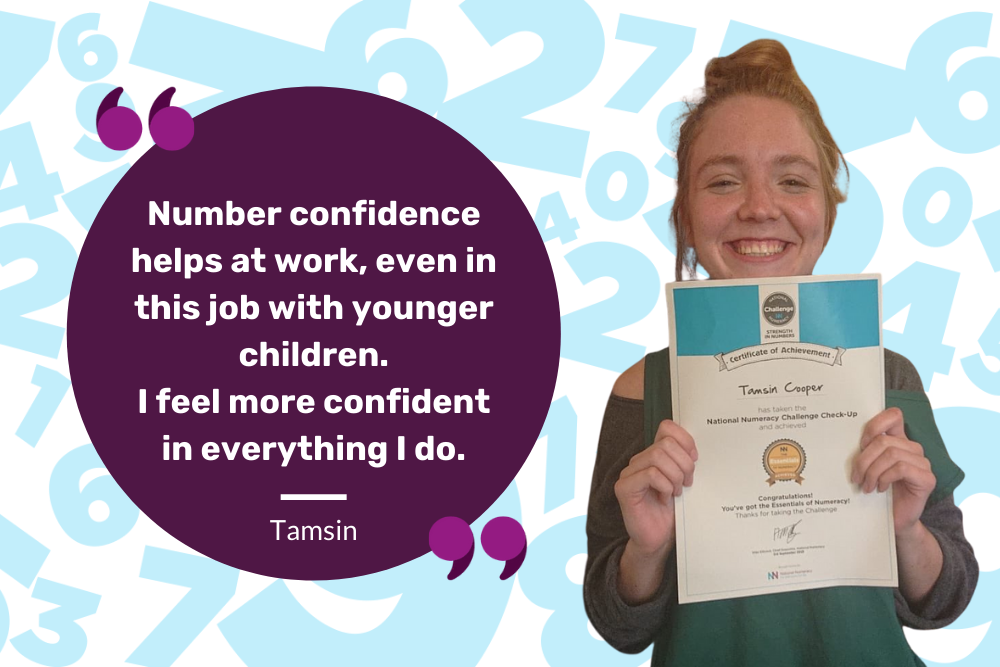 Brushing up on numbers has been great, because I haven’t done maths since I was at school. I’m an apprentice at the minute so I’m doing lots of learning, but not particularly maths. So it’s great doing something different, and realising that I was better than I thought!

I never thought I was any good at maths – I’ve always favoured English and thought I was more suited to that. But after doing the National Numeracy Challenge I’ve realised that actually I’m more capable than I believed, and that I use maths every day.

In the past I would’ve avoided maths, so having a bit of time and space to have a look and realise that actually I can do it has really changed my mental feelings about maths and numeracy. Before I would’ve been more scared thinking about money because of numbers, and checking my bank account, and would maybe have avoided looking at how to budget and thinking about how to use a spreadsheet. I think the National Numeracy Challenge has helped me take a look at that and think about using numbers in a way that’s beneficial to my everyday life.

I remember when I started my job, I was a bit worried about keeping time and sticking to routine, and watching the clock. For some reason I’ve always struggled with telling the time. So realising I’m not as bad at maths as I thought I was has helped me with stuff like that. Keeping time, even doing headcounts – you’re doing maths very quickly. So, number confidence helps at work, even in this job with younger children. And actually, working with very little children and doing emergent maths with them, you realise how much numbers and maths are embedded in everyday life. It’s not all just about really difficult algebra and formulas.

Before doing the National Numeracy Challenge everybody at work groaned about maths, thinking about how it was at school and worrying about not being good at it. But since doing the Challenge, I think because we did it as a group and it involved everybody, together we’ve been really positive about how we did, and we all feel more encouraged when talking about maths with the children. So, it has shifted to a really positive space.

I think it’s really important in our role that we remember that maths isn’t a scary subject to avoid, and we really try and teach the children how maths can be fun and included in everything they do.

Improving my numeracy has also helped me with becoming a Lead Apprentice, and helped me think about how differently people learn, how they approach things they’re a bit nervous about, and how they build their confidence with learning. It has also given me the confidence to take a role like Lead Apprentice, and help encourage everybody in how we work as a group of learners and help build each other’s confidence. It’s also helped me with my organisational skills, especially since, as a Lead Apprentice, I have to arrange meetings and think about timings and when everyone can get together.

The National Numeracy Challenge shows that maths can be a group activity and we can encourage each other and teach each other. And parents can get involved, they don’t have to be worried about maths being something they can’t do with their children.