Thousands of school children across the UK have set a new record for a mass rock and roll version of the five times table to celebrate National Numeracy Day.

GUINNESS WORLD RECORDS™ adjudicator Joanne was at the event broadcast from London to verify that 5,494 devices were logged on the Official Attempt for the ‘most viewers of a rolling numbers live stream’ on YouTube on 18 May 2022, smashing the target of 1,500. 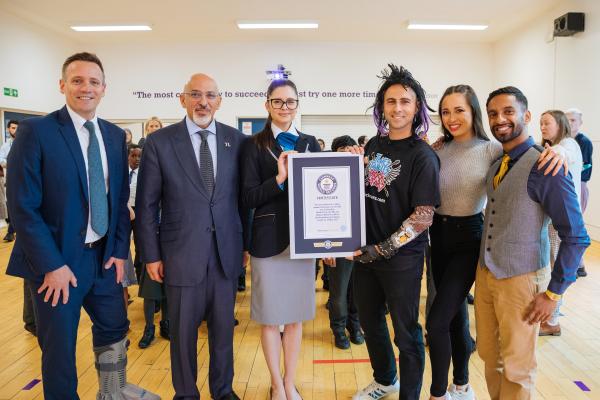 Children from all corners of the UK joined charity National Numeracy and Times Tables Rock Stars for the Rocking and Rolling Numbers live event. Number rolling is a catchy call-and-response chant with accompanying actions designed to get kids feeling positive and confident about maths.

Education Secretary Nadhim Zahawi and Skills Minister Alex Burghart were also on hand to witness the record breaking attempt and congratulated the children.

After the event Mr Zahawi said: “Today has been inspirational. Thank you to the National Numeracy team. It is National Numeracy Day! We have had schools from Northern Ireland, Scotland, Wales and England take part today! It is so important that we give everybody – the little ones as well as adults - confidence in numbers and confidence in maths!”

Bruno Reddy, Founder and CEO of Maths Circle, the creators of Times Tables Rock Stars said: "We are absolutely thrilled that so many schools and families across the UK joined us Rocking and Rolling numbers live this morning for National Numeracy Day. To see the nation come together and share the joy of maths was a really special moment for us and to win a Guinness World Records title is the icing on the cake. Huge thanks to everyone that took part. We're totally aligned with National Numeracy's mission to prove that everyone can be good at maths and we hope that today's event has inspired number positivity."

Craig Glenday Editor in Chief of Guinness World Records said: "Congratulations to all the kids and schools who rock and rolled their numbers and achieved this phenomenal record for National Numeracy Day. Well done - you were all officially amazing. "

In the UK, 49% of the UK’s working-age population has the expected numeracy levels of a primary school child, significantly below the average for developed countries. National Numeracy Day hopes to help change that. It’s website offers free and fun activities, events and resources for adults and children and a quick way to check and improve numeracy via the National Numeracy Challenge.

Back to National Numeracy Day

To get free resources and activities to help children and adults, head over to the main National Numeracy Day page.

Visit our hub for children's numeracy

Visit our hub for adult's numeracy