You asked, we listened: new step-by-step resources within the Challenge

This blog is part of a series exploring key themes of the Mobiles, Skills & Confidence with Numbers project from Ufi VocTech Trust and National Numeracy. We are seeking to make numeracy skills-building more accessible to those who lack time, confidence and computer access, and are blogging about the project’s key themes as we work. 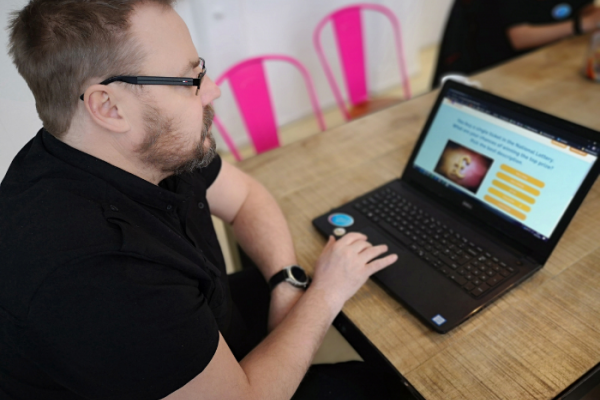 What is the Challenge?

When the National Numeracy Challenge launched in 2014, it was primarily an assessment tool – a place where any UK adult could check their numeracy skills level for free. Providing the right assessment tool was our priority, as we believe that checking and understanding skills is the first step to improvement.

As a small charity, we did not have the funding to create our own learning resources at the same time, so we included links to the best free online learning resources we could find, such as items on BBC Bitesize and Khan Academy. The Challenge acted as a sorting tool, choosing and tailoring the best resources for each learner according to their individual skills.

We iteratively improved the assessment within the Challenge until it became a friendly, easy-to-use, multiple choice, skills check that gives an accurate reading of skills, as well as showing strengths and weaknesses. The check is adaptive, meaning that less-confident learners only see the harder questions if they are mastering the easier ones.

In 2019, we added a new function whereby learners can review the questions they get wrong in a skills check, alongside appropriate links to the best third-party resources. Then in 2020 we introduced a new quick check version, which only takes ten minutes to complete.

Why has National Numeracy now developed our own resources?

Our learners were really pleased with being able to study the questions they get wrong, but we got consistent feedback that, although the links to third-party resources were good, they were not specific enough to help understand the exact question they got wrong. Learners wanted to know the correct answer and they wanted to know how to do the maths behind the question. So, it became our priority to develop our own resources to explain the specific skills behind each question.

Where did we start?

We were fortunate at this point to win support from the Ufi VocTech Trust which allowed us to include this initiative in our ‘Mobiles, Skills & Confidence with Numbers’ project.

For the resources, we didn’t know if learners would prefer text explanations, videos, or interactive resources, so we started off by writing explanations for a handful of questions in Microsoft Word documents that could be tested with learners. We know that people prefer to learn in different ways, so we provided several different explanations, for instance using pictures, bar models, and similar numbers.

We know from our work on the attitudes most likely to help adults engage with improving their skills, that seeing the ‘value’ of maths in daily life is important. So, for each question, we began by explaining why we were asking it, giving examples of how the skills crop up in daily life.

How did we test the resources?

We then recruited adults with lower skills and confidence and took them through the resources. The feedback was consistent:

Where did this lead us?

We used this feedback to create new versions of resources using Microsoft PowerPoint. We simplified these considerably, providing just one explanation broken down into easy steps, and we moved the ‘real life’ examples to the end. We tested this with more target learners and got a very positive response.

We then created animated test resources using an animation software tool called Hype. We changed the format so that the learner could have another go at the question, then see the correct answer, then go through how we suggest the maths should be done, and then view ‘real-life’ examples at the end. We sent these to a range of contacts in partner organisations as well as to learners on the Challenge. The response was overwhelmingly positive.

How did we create the resources?

We then got to work on creating resources for each of the 334 questions in the assessment bank. They went live at the start of November 2020 and are getting a great response so far. We are very proud that the Challenge is now a really effective bite-size learning tool that any adult can use for free, on phone or computer, to check and improve their everyday maths skills and confidence with numbers.

This work made up the ‘skills’ part of the project. In 2021, we will make improvements to the Challenge for mobile users and continue to make the resource more effective in improving adults’ confidence with numbers.

If, like most of us, you would like to consign 2020 to the past and move quickly on, then why not learn something new in 2021, for free?