When we first spoke to Shannon back in 2019 she was on the way to her dream career of teaching. But first she had to complete her PGCE, where the National Numeracy Challenge was being used to support the students with their maths learning.

We caught up with Shannon to find out how the course went, how her career path has changed, and how her increased confidence with numbers is helping her in day-to-day life. 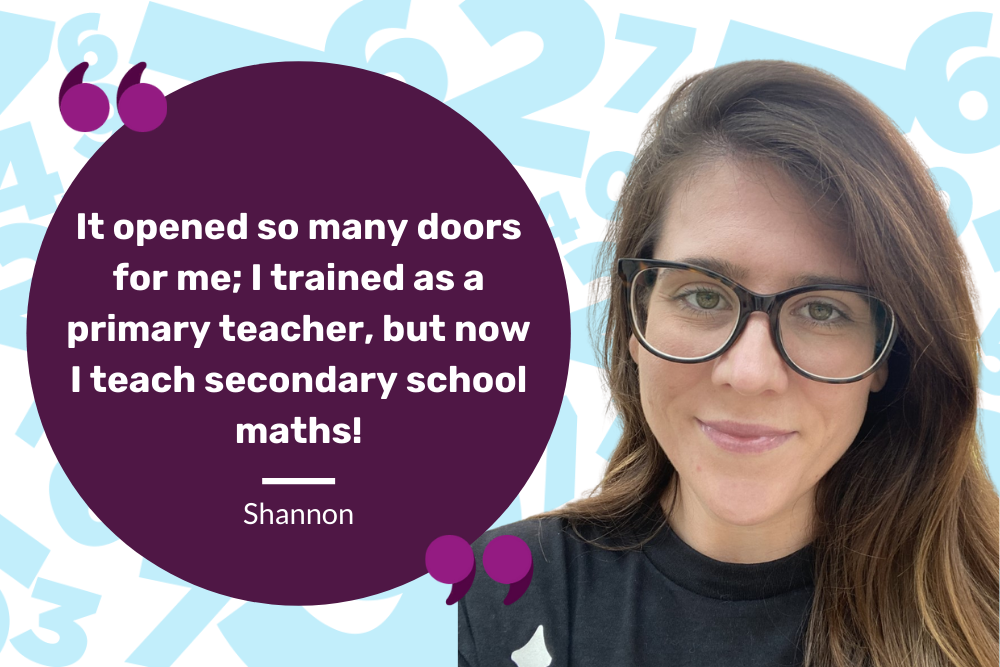 Facing maths on my PGCE

When I first started my PGCE course at Edge Hill University, one of the requirements was that you had to take the National Numeracy Challenge and note down the areas that you could improve on. Then halfway through the course those that hadn’t reached the Essentials of Numeracy had to do it again. It was actually recommended that everyone did it again, whether they had reached 80 or not, so it was really well-implemented at Edge Hill.

Our course was divided into modules, and with the maths aspect I was quite apprehensive at first and worried about it. But doing the National Numeracy Challenge gave me such confidence.

It opened so many doors for me; I trained as a primary teacher, but now I teach secondary school maths!

Before I started the course I was a teaching assistant in a secondary school maths department, but I always felt awful at maths, so I avoided it and trained in primary instead. But during a placement I found that primary just wasn’t for me. So, I applied for a job in secondary teaching and got it! I think there’s such a shortage of maths teachers that if you’ve got the guts to go for it and perform well at the interview, you’re in with a really good chance of getting hired.

My role covers both English and maths, but I’m maths-focused and my timetable is maths-heavy. I teach Year 7s, Year 8s, Year 11s, and resits – so I focus a lot on the exam years, which is tough because I have to teach myself some of the topics, but because I’m not a maths specialist I can present the information in a way that’s really clear to the students.

Teaching students how to access maths is just the greatest feeling, especially because I was in the position some of them are in, where you just think: “I’m not good at maths, I don’t have the skills to do it.” But I know that if I can do it, then all of my students can do it, and that maths won’t be a barrier to any of them.

Having the confidence to take control

I have noticed I’m more confident in everyday life. Before I was a teacher I was working in bars and found it really hard with things like tallying up the till at the end of the night. Today, I closed a savings account and noticed that while it had said the AER would be 2.75% it hadn’t worked out to be that in the end. So, I called the bank and spoke to them, saying “each month it’s totalling 1.4%, not 2.75%”, and the woman was unsure herself, saying “this is really mathematical, I don’t really know what to say!”

I know now that I have the skillset and ability to overcome anything related to maths, whether in my day-to-day teaching or in my life outside of work. I’m not even trained as a maths teacher, I did a primary course, but I have the confidence and skills to sit amongst maths specialists and take part in discussions. This past year I’ve had to do teacher-assessed grades for my class, and having that responsibility as a newly-qualified teacher is something I never would’ve dreamed of.

It gives me a great satisfaction and makes me feel really confident, and happier.

I know now that I’m good at maths – not just good, I’m great at maths, and I’m great at teaching it. Achieving number confidence has definitely helped me achieve things I didn’t think were possible before.